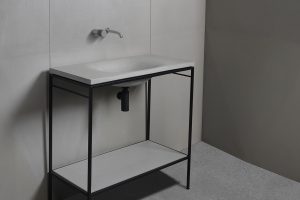 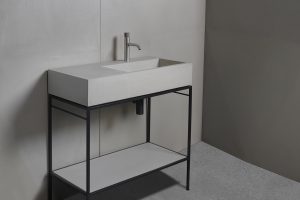 Continue to our furniture series

The black MDF of the dade ELINA contrasts perfectly with the grey of the concrete sink – the design is simple, the workmanship is of high quality. 15cm high drawers nearly touch the cover plate and take on the design of the 15cm high concrete sinks. Optionally there is a drawer and an open compartment for towels etc. or two drawers. dade ELINA is 40cm deep and available in widths of 60, 90 or 120cm. All dade ELINA concrete vanity units can also be made in walnut or concrete look.

With the new bathroom range dade SALONE the bathroom becomes a real eye-catcher. Designed by the dade architects and in collaboration with Timberline, we created this straight-lined and high-quality bathroom furniture piece. dade SALONE can be ideally combined with the dade ELARA or dade ELEMENT countertop washbasins. The width of 120cm and the depth of 50cm offers plenty of space – while the restrained design looks calm and noble. The design is characterized by the borders, which are worked on miter for the wood and with end butt joints for the concrete version. The tip-on drawers with a height of 20cm take up a lot of bathroom utensils. Dade SALONE vanity units are also available in MDF black or concrete look.

The width and depth of the concrete vanity unit can be individually planned.

CONSOLES IN WOOD, CONCRETE OR MDF

Matching consoles made of wood substructures are made in “Vorarlberger” handcraft by our partner Timberline.

THE DREAMTEAM DADE AND TIMBERLINE

Wood and concrete are materials that simply belong together. Concrete and wood are perfectly combined in the dade concrete vanity units, a true dream team so to speak.