In addition to kitchen countertops which refine the kitchens of all the top brands (more information here), dade design has developed its own concrete kitchens which can be purchased directly from us or through specialist retailers. 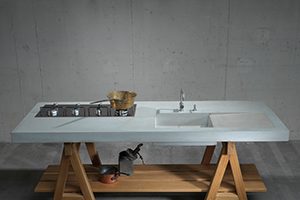 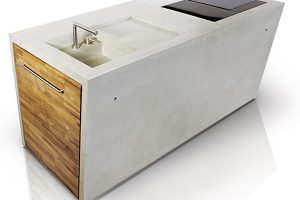 The dade MILANO adapts perfectly to different living situations – as a monobloc in a modern environment, or as a deliberate contrast in traditional architecture. With the specially developed dade ROC, a high-performance fibre concrete and sophisticated mould making and casting technology, it is now possible to produce almost filigree concrete workpieces.  The 13mm kitchen front dade FRONT exists since 2017 and was used for the dade MILANO kitchen, whose body was built from fine walnut wood by our partner company Timberline.

The dade WERKKÜCHE, a design by dade-design, reduces a kitchen island to the essential and imitates a workshop. The VOLA taps and the SMEG gas panel give this kitchen a refined sophistication. A seamlessly poured concrete washbasin 50x40cm including a drainer and high-quality solid oak bucks are included in the price.

Welcoming friends in the garden means – sharing and enjoying quality of life together. Gourmets love sophisticated cooking even outdoors. The high-quality dade-outdoor kitchen THE CONCRETE fulfils the highest expectations with its sophisticated design in terms of aesthetics, functionality as well as longevity.

Any questions? – The specialists from dade design will advise you in your planning process.

Seamlessly poured concrete washbasins in all sizes can be integrated into kitchens and countertops.

Our kitchens can be fittet with high-end appliances of your choice.

The dade ROC base mixture can be dyed by adding pigments. The dade design standard colours are white, natural grey, anthracite and pink. Terrazzo surfaces are currently trending in modern buildings. To create Terrazzo, the cement surface is ground in 6-7 passes to make the grain visible. The grinding process simultaneously closes and seals the surface. Find out more about colours and terrazzo here.